Creating rapport with strangers through screens

Reaching through a computer or phone screen to pluck the heartstrings of strangers and make them feel as if they know you is no small feat. It’s more than addressing people by [firstname] custom field. It’s more than blogging or sending e-news regularly. It’s not about documenting your every move on Instagram.

Creating rapport with strangers through screens is where digital marketing really hits the road. If you cannot reach new people who’ve never before heard of your business and, over time, inspire their trust in a low-trust arena (ie: the internet), then it’s highly unlikely that your marketing efforts will translate into sales.

You have a massive advantage when people can meet you face-to-face, such as with a bricks-and-mortar business. For those of us working from home or otherwise selling through our websites, we have none of the advantages of non-verbal cues and face-to-face rapport-building, nor the ability for prospects to pick up what we’re selling, turn it over in their hands, have a sniff, feel or examination, and decide whether or not they deem it worthy of its price tag.

So how do you do meet strangers through the internet, invite them back to your place, and woo them with dulcet tones, after-dinner sweet treats, and promises of a better tomorrow?

Commitment is key to any good relationship. And yet so many businesses fail to do bare minimum marketing of regular blogging and email newsletters.

Commitment is not commitment to being repetitious or slavishly brand-focused. It’s simply commitment to turning up and responding to conversation. Surely that’s the least you expect from a friend?

You have an opinion about your industry. Hopefully, you have your soapbox rants that you pull out at parties – the kind of rants where people lean in while your partner leans out, suppressing an eye-roll for the speech they’ve heard a thousand times before. That’s what makes your rants so good – you’ve had years to perfect your timing, shine your jokes, and embody the passion that powers your charisma.

The world is overstuffed with lukewarm, me-too, half-baked regurgitated information-trussed-up-as-opinions that sounds like a whole lot of blah blah blah. For the love of all things holy, put some skin in the game! Say something worth listening to and people will lean in.

Stop talking to the skeptics

Who’s squatting in your head? The snarky competitor? Your frenemy – the one who effortlessly undermines your confidence with subtle passive aggressiveness?

Evict those squatters. Stop dwelling on the skeptics. It’s not your responsibility to change people’s minds. Unless you’re mounting a public health campaign – with ample resources – you’re wasting your talent, creativity and mental health having a head full of skeptics.

Evict those bludgers now and get on with the task of talking to the ambivalent, the supportive and the devoted.

Influence in the new world: PR, SEO and networking

We make marketing far harder than it needs to be by attempting to start a party when we could be mingling at other, bigger parties and inviting people back to our place.

The brave new world of business doesn’t use one overarching tool, such as, for example, Facebook advertising. Influence in the new world is a delicious combination of digital marketing, search engine optimation (SEO), Public Relations (both your own blogs and other content, as well as the publicity you gain through this) and networking (which relates back to link-building, a pivotal part of SEO).

Case in point: my appearance in Money Magazine this last June, Australia’s largest personal finance magazine. The editor Googled something like “small business digital marketing”, my website appeared (thanks to my regular business blogging), and the editor contacted me.

As a consequence, I gained magazine publicity, resulting in inquiries from financial industry professionals.

All the things that could go wrong

When was the last party you went to when you didn’t know hardly anyone? Even if you’re an extrovert, I bet you were a little skeptical, fearful, or at least uncomfortable. Meeting strangers isn’t always fun. Putting yourself out there on the internet can provoke vulnerability.

You may attract trolls and other haters. Your opinions may not provoke camaraderie or rapport. Your commitment to regular marketing may be met with indifference or derision. But it’s unlikely.

At school, children learn the difference between likely and unlikely, probable and improbable. But as adults, we allow fear to squat in our minds and restrict our actions. We let our impact be blunted by the invisible court of public approval. We bland ourselves out in a quest to be likable rather than impactful.

If you’re selling services through the internet, your marketing needs to work. It’s a bit more complicated than posting pictures to Facebook or sending regular emails. But it’s not impossible. The same rules of rapport-building in real life apply online: be present, responsive and consistent; say something worth listening to – entertain us!; don’t worry about the haters; grow your influence through building your reputation. 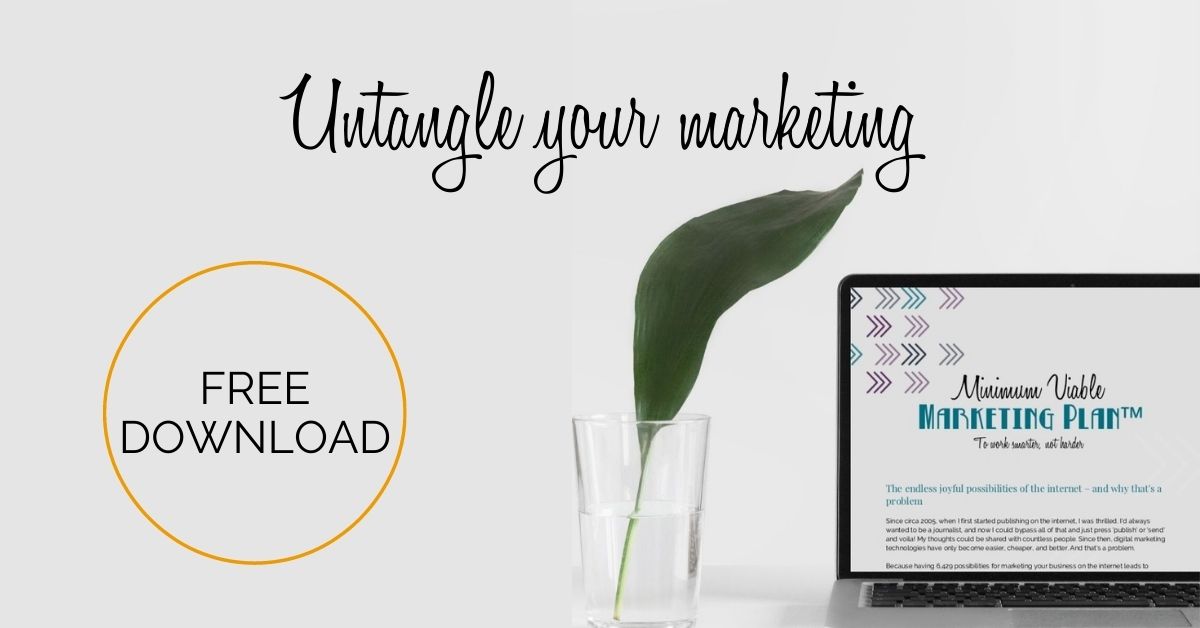